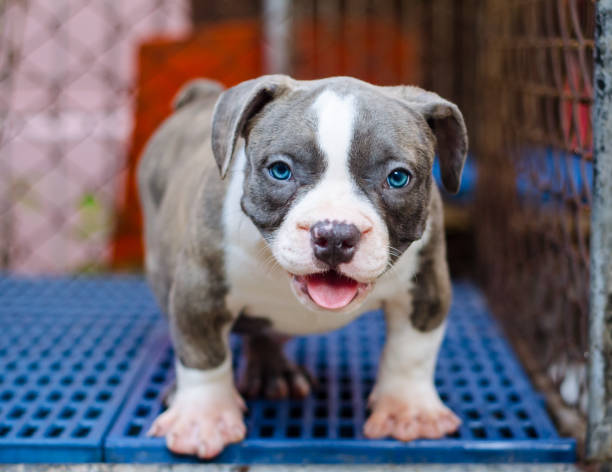 Baby pitbulls are known for their broad, wedge-shaped head and thick neck.

Pit Bull puppies usually stop growing around 18 months-old but you can tell how much bigger they might get by looking at the size of their paws.

Listed below are some facts about baby pitbulls and things you should know if you desire to have one.

1. They Are Loving Family Dogs

Talk about dogs that are loving and can also be used as family dogs, then you have the pit bulls.

These dogs are also known as “nanny dogs” because of their friendly nature most especially towards their owners and little children. They are loving and gentle. They are also very sociable and can relate well with the whole family members.

Due to their friendly nature, loyalty and devotion, they are not always used as guard dogs because they are trusting of strangers but one thing they do not fail to do is to defend their family when they sense danger around.

2. They Are Very Playful

Baby pitbulls can be very playful and loves to chew, that is why provisions of strong toys should be made for them.

This breed of dogs can be very destructive at times when not mentally and physically stimulated so avoid having them if you are a busy kind of person that can’t carve out a little time to spend with your dog. Just know that this breed is not for you.

Since they love to chew, it is pertinent that you get them strong chew toys. They are known for their strong jaws so get them durable toys that they can chew.

Do not get them toys that can be easily destroyed and swallowed.

3. They Need to be Trained and Socialized-With

Despite the fact that most baby pitbulls can be very stubborn and bossy, they still can be trained to be good dogs.

They are very smart and can understand tricks easily when disciplined and trained consistently.

One of the things that can be helpful to them at this early stage of their life is to allow them constantly relate with other dogs as it makes them be more sociable and also prevent them from being aggressive.

Pit bulls still face unfair discrimination. Often times, they have been banned by Breed Specific Legislation because they are stated to be destructive and cruel on media.

Rottweilers, Doberman Pinschers have all been discriminated one time and again.

Pit bulls have been given worse reputation based on the fact that some people use them in bull baiting even though they generally have more pleasant temperament than most other breeds.

The bull-baiting act was outlawed in the year 1835 because it is a cruel act that has to do with putting dogs with bulls in a fighting ring.

Though the pit bulls were bred for this purpose but in recent times, their aggressive nature has almost been bred out of them and they aren’t aggressive to humans except they are trained to be.

Baby Pit bulls are very wonderful and loving creatures that you can have as a dog lover. They aren’t harmful and aggressive.

If you reside in an area where laws against pit bulls exist, then it might be difficult to have a baby pit bull in your custody because the Breed Specific Legislation or authorities can seize your puppy.

If such laws exist in your area, you can call your representatives and request to have these laws changed.