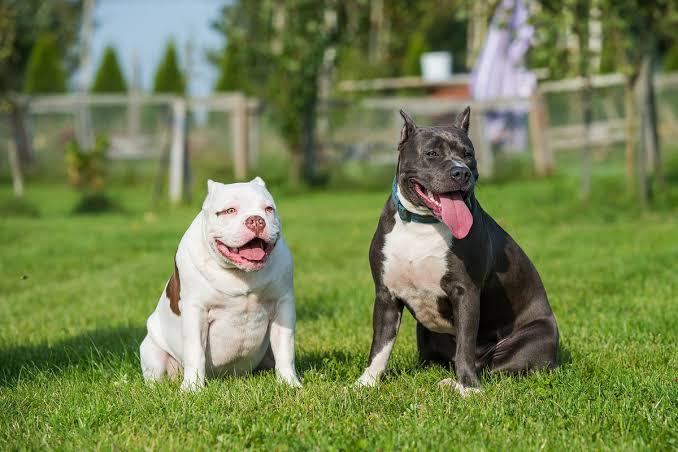 It is commonly known that the word “pitbull” refers to a specific dog breed, but that’s not true at all.

Pitbull is another word for “bully breeds,” which is a type of dog breed that is known for their great strength and size and also for their playful personality.

Generally, there are 5 types of Pitbulls based on their size, characteristics, and colors.

5 Different Pitbull Breeds You Should Know

In this article, we are going to be talking about these types of Pitbulls and all you need to know about them.

Number one, of course, is the American bully. The “American Bully” is commonly known as the original pitbull and is commonly bought around the world.

This type of Pitbull is known to be really cuddly with their owners, really friendly with children and babies, and particularly vicious to strangers.

They are muscularly built and come in colors like blue, black, brindle, fawn, brown, and many more.

Although many people use them as outside dogs, they make fine pets as indoor dogs and parlor dogs.

Bulldogs are known to be more aggressive and vicious than Pitbulls, and what many people don’t know is that not all bulldogs are like that; it has to do with training.

Vicious bulldogs are what they are because of the way they were raised; they are just like any other dog that can be vicious if you train them to be.

But there might be another reason for their aggression, like when they feel threatened, protected, or afraid. Bulldogs are especially aggressive toward strangers.

American Bulldogs are stocky-built and have a deep chest and short muzzle.

They are commonly white in color with patches, but there are other colors like red, black, brown, or gray.

The Staffordshire Bull Terrier is not a common type of Pitbull like our friends in numbers one and two, and it’s really shocking that they are not common because they are really loyal and affectionate, not only to their family and owners but even to strangers.

These types of Pitbulls are surprisingly not aggressive to us humans, but I won’t say the same about their behavior toward dogs. They are really aggressive toward other dogs.

They are smaller in size compared to pitbulls and bulldogs and are muscularly built. They come in colors like black, blue, brindle, fawn, white, and many more.

This type of Pitbull might have almost the same name as the Staffordshire Bull Terrier, but they are different types.

This type of Pitbull is playful and loyal to their owners and other people, but they can be really aggressive when provoked.

They have short fur and come in a variety of colors, but commonly come in black and brown.

These types of Pitbulls are highly loyal and affectionate to people, but like American Staffordshire Terriers, they can be aggressive when provoked.

So let’s not make it angry. This breed is medium-sized and muscularly built, and they are often used for dog fighting, making the dog really vicious.

Like I said earlier, like any other dog, a dog can be vicious due to their training.